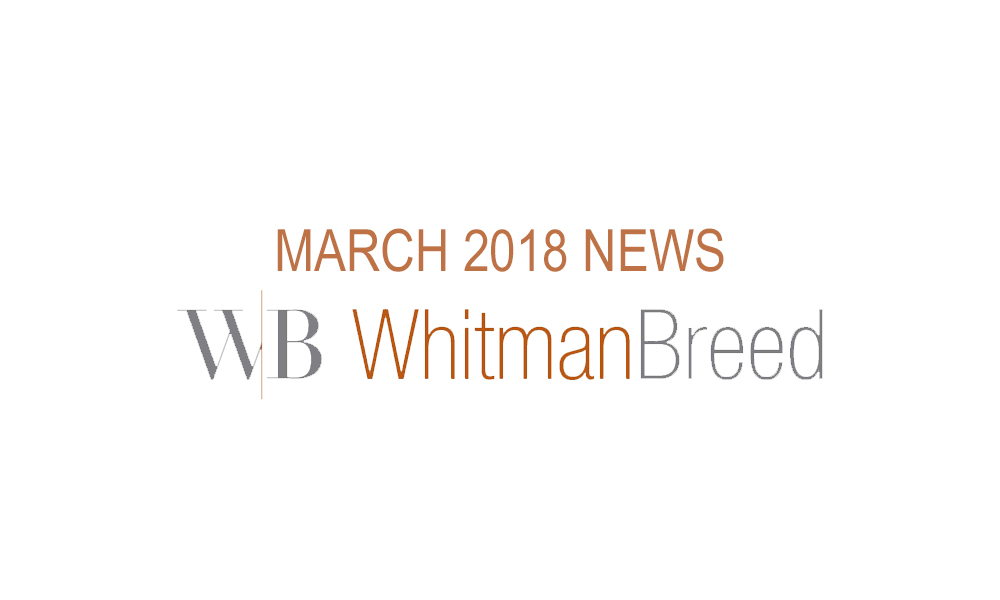 The Firm successfully moved to dismiss an appeal taken by a Swiss trustee from a probate court decision holding that it had jurisdiction to hear a trust accounting petition.  The court agreed with our arguments that it lacked subject matter jurisdiction over the appeal because the trustee was not aggrieved by the probate court’s decision merely to hear the matter.  This decision conclusively preserves the probate court’s finding of jurisdiction in a case where the trustee had twice moved to dismiss claiming that the petition should be brought in an offshore jurisdiction.  Charlie Pieterse, Richard Lawler, and Wyatt Jansen handled the matter.

The Firm is proud to announce that Jim Riley and Charlie Pieterse were nominated and approved as James W. Cooper Fellows of the Connecticut Bar Foundation. The Fellows is a collection of the State’s most outstanding lawyers, judges and law professors recognized for their accomplishments and service to the legal profession.  The Fellows sponsor programs, projects and forums throughout the State of Connecticut that address matters concerning the administration of justice and the rule of law in society.

The Firm is proud to announce that Luke Tashjian has been named a partner in the Trust & Estates, Business Law and Tax Departments. Luke joined the Firm as an associate in May 2015, and his practice includes structuring tax efficient transactions; advising clients on the tax effects of proposed transactions; preparing estate planning documents; probating estates and preparing tax returns; formation of not-for-profit entities; and representing parties in tax controversies and collection matters.

The Firm successfully moved to dismiss a case against a client, who had acted as noteholder representative under a security agreement governing a private equity investment.  The client had been sued by a private equity investor for allegedly improperly extending the maturity date of the investor’s note.  The Firm filed motion to dismiss the case against our client, a non-resident, for lack of personal jurisdiction.  The motion was granted, and the investor did not refile against the client in his home state, relieving him from any liability.  The claims against the remaining defendant were later disposed of on summary judgment on many of the grounds set forth in a legal opinion that the Firm had drafted at the time that our client extended the maturity date. Rod Saggese and Michael Battema handled the litigation, while Kevin Walsh and Wyatt Jansen prepared the earlier legal opinion.

Rod Saggese was elected to the Board of Directors of the Silver Shield Association Education Fund (the “SSAEF”). The SSAEF is a 501(c)3 organization that provides post-high school educational financial assistance to the dependent children of the sworn members of the Police Department of the Town of Greenwich.

The Firm successfully opposed a motion to dismiss a petition seeking an accounting of a trust and ancillary injunctive relief.  The motion, brought by the trust’s Swiss trustee, sought dismissal on the grounds that the appropriate forum for disputes relating to the trust was the Caribbean island of Nevis.  We prevailing in arguing that the appropriate forum was Connecticut, where the trust’s property and beneficiaries are located.  Charlie Pieterse, Richard Lawler, and Wyatt Jansen handled the matter.

Charlie Pieterse was recognized in the 24th Edition of The Best Lawyers in America for the practice area of Litigation – Trust & Estates.  See selection methodology at https://www.bestlawyers.com/Methodology

The Firm prevailed on one of two appeals before the Connecticut Appellate Court in a case brought by a major European bank seeking to impose individual liability on our client for a foreign judgment exceeding $300 million.  The bank’s appeal argued that the doctrine of collateral estoppel precluded our clients from relitigating issues allegedly decided in the foreign judgment.  The Appellate Court agreed with our arguments that it did not.  Charlie Pieterse, Thomas O’Connor, and Wyatt Jansen handled the matter.

The New York Supreme Court of New York County granted the Firm’s motion to dismiss claims brought by a major European bank alleging that the Firm’s clients fraudulently received more than $150 million in assets. The Court agreed with our argument that our clients, a Monaco resident and a Turks & Caicos Islands corporation, were not subject to personal jurisdiction in New York. The decision was covered in the national and international media. The case team consisted of Charlie Pieterse, who argued the motion, Tom O’Connor, and Wyatt Jansen.

Jim Riley was elected to the Board of Directors of the Fairfield County Bar Association for a two-year term, 2017-2019.  Rod Saggese was elected to continue to serve on the Board as Immediate Past President for 2017-2018.

The Firm has been retained to serve as counsel to the largest commercial real estate service and investment firm in the world as the receiver of a 1.1 million square foot office complex in Fairfield County.  We represent the receiver in all aspects of owning, leasing, and managing the complex; in connection with a potential sale of the property; and in litigation matters arising from its role as receiver.  Cyd Smith is handling the real estate matters, and Rod Saggese is handling the litigation matters.

Luke Tashjian was elected Chair of the Tax Section of the Connecticut Bar Association.

The Firm negotiated a favorable settlement for our client, a division of an international construction conglomerate, in a $25 million lawsuit brought by the State of Connecticut.  The suit arose from alleged deficiencies in the design and construction of a major public works project completed in the mid-1990s, on which our client served as construction manager.  The case involved discovery spanning more than 25 years, as well as complex engineering, design, and construction issues concerning the standards in place at the time of the original design and construction of the project.  After a 5-day mediation, we settled the case for a small fraction of the State’s initial demand.  Jim Riley and Wyatt Jansen handled the matter.