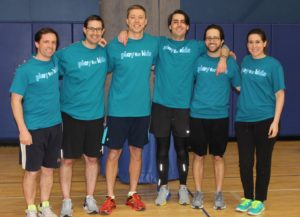 A team from the Firm composed of Tom O’Connor, Wyatt Jansen, John Hendele, Eva Kliegman, Giovanni D’Amico, and Michael Battema participated in the Center for Children’s Advocacy Play for Kids event on March 7th at Chelsea Piers in Stamford, Connecticut.   Play for Kids is a friendly athletic competition between teams of young professionals from throughout the NYC metro and Fairfield County area.  Play for Kids raises funds for the Center for Children’s Advocacy, an organization providing legal services to Connecticut’s most vulnerable children.  The Firm raised $1,200 for CCA by participating in the event.

The Firm is proud to announce that Luke Tashjian was recently elected as a Fellow by The American College of Trust and Estate Counsel (ACTEC).

ACTEC is an organization of peer-elected lawyers and law professors who are skilled and experienced in the preparation of wills and trusts, estate planning, and probate procedure; and administration of trusts and estates of decedents, minors, and incompetents.  To become an ACTEC Fellow an attorney must first be nominated by an existing Fellow, undergo a substantial application process, and then be voted on by the ACTEC Fellows in the states in which the Lawyer has practiced in the past ten years (i.e. Connecticut, New York, and Massachusetts for Luke). After being approved by the Fellows in the states, the attorney is voted on by the ACTEC Board of Regents at a national level.  Lawyers and law professors are elected to be Fellows based on their outstanding reputation, exceptional skill, and substantial contributions to the field by establishing a history of lecturing, writing, teaching, and participating in bar leadership and legislative activities. ACTEC is the premiere estate planners’ organization in the United States, comprised of leading trusts and estates lawyers in all 50 states.

The Firm successfully opposed an application for a variance to construct an apartment building on West Putnam Avenue. Jim Fulton took the lead in representing the opposition group against the project and request for the variance to accommodate it.  The Greenwich Planning and Zoning Board of Appeals denied the application.